I Want Clinton To Take It To The Convention

The Democratic Party needs a good dose of DEMOCRACY for once. The choice is not clear and there should be a debate and maybe even a full on fist-fight on the floor of the convention. That's the way it used to be and it's refreshing to see it looming once again because the Party needs to decide what it is to become and what direction it will go in the future. The first President Clinton moved the party away from is weak, leftist ties and moved it towards the center and this allowed it to become a realistic option in 2006 to replace a screwed-up Republican Party in the Congress. Democrats elected in 2006 were not far-left freakazoids but (YIKES!) fiscally responsible, level headed thinking types. These were not Howard Dean/Nancy Pelosi flakes but serious roots for a productive and respectable Democratic Party of the future. Obama represents a giant step backwards to the policies and philosophies that brought the party down and turned it into a bad joke. To force Hillary out of a race that is clearly not settled shows a darker side of the Democratic Party that for some reason the party leadership can't understand how much this turns the average American off. Fair is Fair.

Then again, if the Democratic Party was at all interested in fairness they would have counted Florida and Michigan primaries. Instead the Party decided to - PUNISH - the voters in those states for making the choice to move up their primary elections so that they would have a say in the choice of candidates for the White House. PUNISHED. PUNISHED for exercising their right to vote and when they damn well please to.

What a wonderful message to America: "Fuck you, it's our way or the highway".

That is the message to Floridians and Michigan voters, if you otherwise you are a fool. Speaking of fools, all of this can be laid at the feet of Howard Dean, the Democratic Party Chair, a man who is in the wrong position at the wrong time and is undermining the Party's forward progress with every decision he makes. The downward spiral will speed up with an early Hillary departure as Americans would then focus on Obama, who is a troubled candidate in so many ways.

This process should be taken to the convention floor where a genuine debate might actually take place. I think that this would be a bright moment in US history as the democratic process gets a full workout for the first time in a great while in the United States.
Posted by M Gregory Ferris at 7:56 PM No comments:

Point Lobos, Because I Can 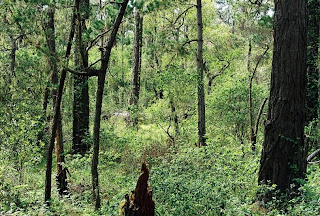 Wednesday found me with four hours to kill on the Big Sur coast. I was in a great mood because I had just had my breaks done and I'm now mobile again. My Marine Science class had intended to go on a field trip but it was rained out half way through so we scheduled a make-up session and I chose to tag along with the PM class so I could have Thursday off all together. This meant linking up with them at Garapada Beach at 6:30pm and since my last class wrapped up at noon I had to figure out how to kill all of that time. I have no money so shopping was out and I needed to begin a new fitness regime so I headed down to Point Lobos.

Since 2001, I haven't been on that side of the hill. Carmel is my home but it sure ain't my town any more. Driving through the city I silently grieved for my home town that has lost it's way. The building of over-sized homes in Carmel is an obscenity and I'm glad I don't live in a place where such vile tackiness is allowed. I drove past my boyhood home and the folks there are keeping te place in great shape. I then headed down Pacific Coast Highway 1 to Point Lobos. Since I'm a broke college student I parked on the highway and walked into the park for free and first went to the east side of Whaler's Cove. The place has been overgrown with young Monterey Pine which were planted by the state to replace the ones killed by the Pitch Canker pandemic that wiped out thousands of pine trees. I made the shoreline and I began my transformation back into the spiritual creature that I keep hidden from the world and spent time photographing rock formations as the ocean hissed it's ancient song to me in the background.
Once I'd seen enough at this location I turned and went south on a trail the bisects the park at it's widest point and too me into the beautiful Forest. It has begun to bloom so in the mid-afternoon light the forest glowed green with highlights of purple wildflowers. I could hear cars speeding past the park a hundred yards away and I felt sorry for those people because this place is so amazing and they were missing it. At the mid-point of this trail I encountered a dead Monterey Pine that was still standing tall, it's branches weathered and bare. I stopped for a second to really think about what I was looking at; this was a tree that sprang to life about 120 years ago and had seen many changes. Even though it was all but dead it wouldn't surrender to gravity, at least not now and stood there defiant in the forest daring God to knock it down. It made me think about if I had been alive 120 years ago, how would I have defined myself in the world? Who would I have been back then? Would I be so different? I mulled over these questions for the rest of the hike until I made it to the south shore of Point Lobos. I never answered those questions either, I just didn't have a clue.
I worked my way along the shore photographing rock formations. Ansel Adams and Edward Weston photographed many of the same places 60 years ago and I already know that I will return soon with black & white film to duplicate some of their work. I stopped at the tide pools and lost myself for a while inside of the mini-worlds offered in each one. Tiny fish, Hermit Crabs and larger crabs seemed to lounge around as they waited for the sea to return. Then it was time to head south so I walked the mile back to my truck and drove down to Garapada. When I arrived the sun had begun to drop making a quarter of the horizon vanish into a bright, shimmering light. The wind was cold and I bundled up. I went down to the beach to shoot pictures in advance and then decided to get back to my truck because it was freezing. Once I returned to the road I looked out and saw the spout of a whale about 500 yards off shore. I grabbed my binoculars and saw the giant tail disappear into the water. So I decided that I would sit in the bed of my truck and count whales until the gang showed up and that's exactly what I did.
I counted 28 Gray Whales. Just a great way to kill an hour and a half if you ask me.
I love it here.
Posted by M Gregory Ferris at 9:24 PM No comments:

I'm now heading into my seventh week of school and it turns out that Marine Science is my strong suit. I mean, it's a great class and I'm doing great with the subject. I mean today we looked at rocks but not they're not just rocks they're Igneous, Lithogenous or Biogenous rocks. Holy crap, those were three words that weren't in my vocabulary let alone being able to tell you about them.

It seems I've found my major.

Monterey is Disneyland for Marine Scientists of every stripe, I'm going to be one of them.

I'm still writing my book and all but Marine Science looks like something I can make a difference in. It seems that most scientists are so focused on their specialty that they have little knowledge of other things. Subjects such as local history and folklore would give scientists of every discipline an advantage in their studies. I can bring that to Geology and study of the Marine environment.

This is going to be fun.
Posted by M Gregory Ferris at 10:29 PM No comments: